Chanukah is the Jewish eight-day, holiday “festival of lights,” celebrated with a nightly candle lighting, special prayers, and mindful foods.  This holiday we celebrate the happening of miracles.  This year we it starts on December 12 at sunset.

The Hebrew word Chanukah means “dedication,” and is thus named because it celebrates the rededication of the Holy Temple.

In the second century BCE, the Holy Land was ruled by the Syrian-Greeks, who tried to force the people of Israel to accept Greek culture and beliefs instead of their own views.   Against all odds, a small band of faithful Jews, led by Judah Maccabee defeated one of the mightiest armies on earth, drove the Greeks from the land, and reclaimed the Holy Temple in Jerusalem.  After the defeat, they sought to light the Temple’s Menorah (the seven-branched candelabrum).  They only found a single day worth of olive oil that had escaped contamination by the Greeks. They lit the menorah and, miraculously,  the one-day supply of oil lasted for eight days.    To commemorate and publicize these miracles, the sages instituted the festival of Chanukah (resource from http://www.chabod.org). 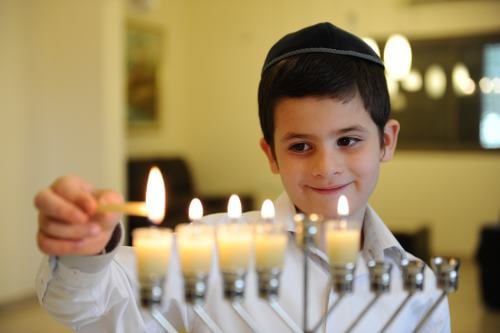 The center of the holiday includes lighting the menorah nightly. The menorah holds nine flames, one of which is used to kindle the other eight lights. On the first night, we light just one flame. On the second night, an additional flame is lit. By the eighth night of Chanukah, all eight lights are kindled.  Special blessings are recited, often to a traditional melody, before the menorah is lit, and traditional songs are sung afterward.  A menorah is lit in every household (or even by each individual within the household) and placed in a doorway or window. The menorah is also lit in synagogues and other public places.  We also celebrate Chanukah by having a traditional dinner, exchanging gifts and playing dreidel (resource:  http://www.chabod.org).

Traditions are the transmission of customs or beliefs from generation to generation.    Traditions include cooking special menu items.  Recipes are passed down from great-grandparents to grandparents to parents to children.  When we think of Chanukah, we think of spending quality time with family and the wonderful meal that we share.  Each part of the meal has special meaning.  A meaning that is symbolic of the holiday; that reminds us of memories we shared and a meaning that is nourishing.

On the menu, we include potato latke, baked salmon, coleslaw, carrot casserole, beet salad, challah, wine, and dessert.    Some the of menu items are new and some old, some are considered healthy while others are considered rich.  The key to mindful eating is balance and moderation.  Mindful eating is eating with intention and attention.  Eating mindfully is about listening to your body’s hunger cues and stopping when full.  Eating mindfully is thinking about what you are eating and the meaning of it.  Whether it is about a memory you have, where the food was grown or what it does for your body; all of these types of thoughts are mindful.

Potato Latke – This holiday would not be the same without Manischewitz  Potato Latke Mix.   This a company that has been around since 1888 and has been used through the generations.  Sometimes using a box mix verses from scratch is more than for convenience.  It is a tradition!  The potato is the star of this appetizer.  While there are many variations in the potato latke, no matter what recipe you choose it is always the life of the party.  Applesauce, sour cream or both are used for dipping and one over the other when eating meat and kosher practices are followed. 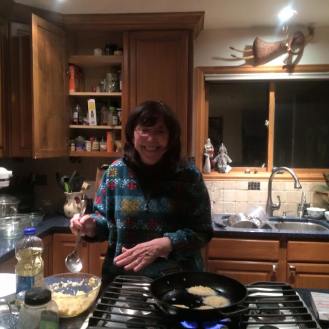 Salmon–  Salmon is a great addition to the holiday meal.  Traditionally, Jews eat salmon as lox on a bagel.   Creating new traditions such as substituting a lean protein for a higher saturated fat protein and adding new meaning to the main dish is significant.   Salmon is a great source of omega 3’s which supports brain function and prevents inflammation.  Whether farm raised our wild-caught, both are considered healthful options.

Cole Slaw– Cabbage is the main ingredient in this favorite side dish.  Cabbage is a superfood.  It has been shown that cabbage is a contributor in the prevention of chronic illnesses affecting us in the 21st century.   Cabbage has key vitamins, minerals, and phytonutrients that are essential for health.   This approved-by-most side dish can be fattening but it does not have to be, nonfat plain Greek Yogurt is the secret ingredient that adds protein and no saturated fat.

Carrot Casserole- Casseroles are known to be comfort foods.  Comfort food is food that provides a nostalgic or sentimental value to someone and is usually characterized by its high caloric nature, high carbohydrate level or simple preparation. The nostalgia may be specific to an individual, or it may apply to a specific culture.  When we add carrots to our comfort food, we change it up adding more nutrition, decreasing overall calories but still are able to enjoy the comfort of the dish.  Try this great receip and add carrot casserole to your family traditions today.

Pickled Beet Salad– Dinner would not be complete without a salad.   Depending on where you are from, salads are eaten before or after the main meal.  Historically, Jews ate beets in a sour soup known as borscht.  Borscht is known throughout  Eastern Europe cuisines including Ukraine, Armenia, Russia, Poland, Belarus, Lithuania, Germany, and Romania.  The beet symbolizes love and a healthy heart.  Research shows beets support heart health, blood flow and when concentrated into juice, increases stamina when exercising.  Beets are high in fiber and folate.  Beets prevent inflammation and oxidation in our cells.

Challah– Challah is a special Jewish bread.   So many of us avoid or greatly limit bread.  This bread is a bread not to avoid.  A small piece with a special meal is meaningful. The challah is amazing and may be considered the best part of the meal.  It may actually be the most spiritual and oldest part of the meal dating back to the bible.   It is a braided egg-based bread and has deep meaning.  The challah symbolizes love, truth, acceptance, growth, freedom, balance, family connection, fullness, and fairness.   Enjoying a piece of challah with a special meal is mindful.

Dessert- One of the most popular Jewish desserts is the chocolate babka.  The chocolate babka became a star on a Seinfeld episode.  The word babka means grandmother in many Eastern European nations. Babka can be made in varied flavors.   This type of rich dessert is special and is not an everyday dessert but rather for a special event.  This may be part of your Chanukah dinner, it may be something that you buy pre-made or that you make from scratch; just remember to start planning early for this once in a while delicacy.

No matter what you have to eat during your celebration be mindful and enjoy it!  We wish you a happy and healthy Chanukah.   Take a moment and appreciate all of the miracles in our lives.